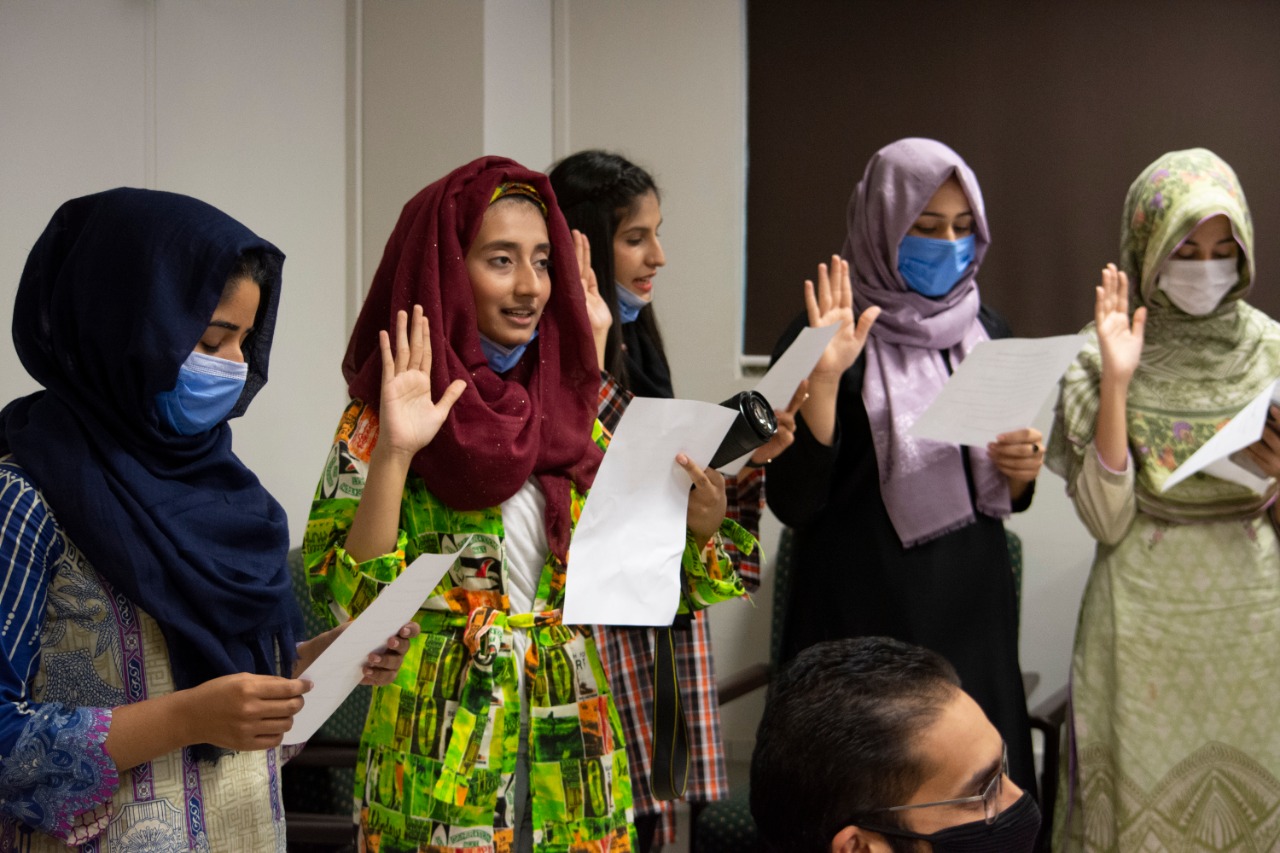 Circulars were distributed, new members were informed and Patrons were made available to celebrate oath taking ceremony. It was 22nd of October,2020, evening about 4:00pm. Crowd begin to rush inside the workshop B block second floor. People were appointed from different departments and different age groups. Everyone had big dreams and expectations in their eyes, they were fully energetic and excited about the ceremony. Finally an announcement was made, it said,” All the new members and concerned persons are requested to get in, be seated and switch off their mobile phones to maintain the decorum.” This was an alarm which made all members seated and well disciplined in terms of sitting quietly to let the ceremony begin.

The ceremony was hosted by Urooj Mumtaz, who took an amazing start by disclosing the aim of IEEE student branch CUST,Islamabad. After which Mr. Abdul Hadi enlightened our souls by reciting a few verses from Holy Quran. Officially, the ceremony had begun. Moving ahead, newly appointed Chairperson Mr. Muhammad Haider Ali was invited on the rostrum to share his address. He had been social media head in Executive Committee of the year 2019-20. He shared all the activities conducted and arranged by IEEE student branch since past 4 years in a short video. He expressed his motives and with well wishes and high aims ended his words. It was heard that a warm welcome and sound motivation had always been a tradition of IEEE family. After big applause Miss Nayab Ali was called ahead who has been the Chairperson of IEEE for past 4 years. Ex.Chairperson in her address put light on dedication and learning she get from IEEE. After her story sharing and her feelings about her personality before and after been to IEEE provided a great motivation and inspiration for new members. Now, she was requested to take oath from new members. With shiny eyes and fast beating hearts promises were made to get united and make society reach more success.

The best part of Oath taking ceremony was everyone was volunteering to work for a cause with full dedication. After oath taking, Mr. Abdul Qazi, worthy patron took over the stage. He presented shield and certificates to Ms. Nayab on behalf of her team. After giving certificates on behalf of previous EXCOM to Miss Nayab, Head of patron Mr. Abdul Qazi and Mr. Waleed gave message to the new members. They made every aspect crystal clear. There was no place of ego for such a prestigious society to hold. All members were given equal powers and rights. Tasks were distributed with the aim that together we can.

Motto was set “Success comes to those who are too busy looking for it”. After all emotional words and promises, the event proceeded to cake cutting ceremony. Patron along with Ex and newly appointed Chairperson cut the cake. It was then distributed among all the members present in workshop. The whole ceremony was covered by Media head Miss Manahil and Rida Fatima. At the end, everybody left with happy faces.