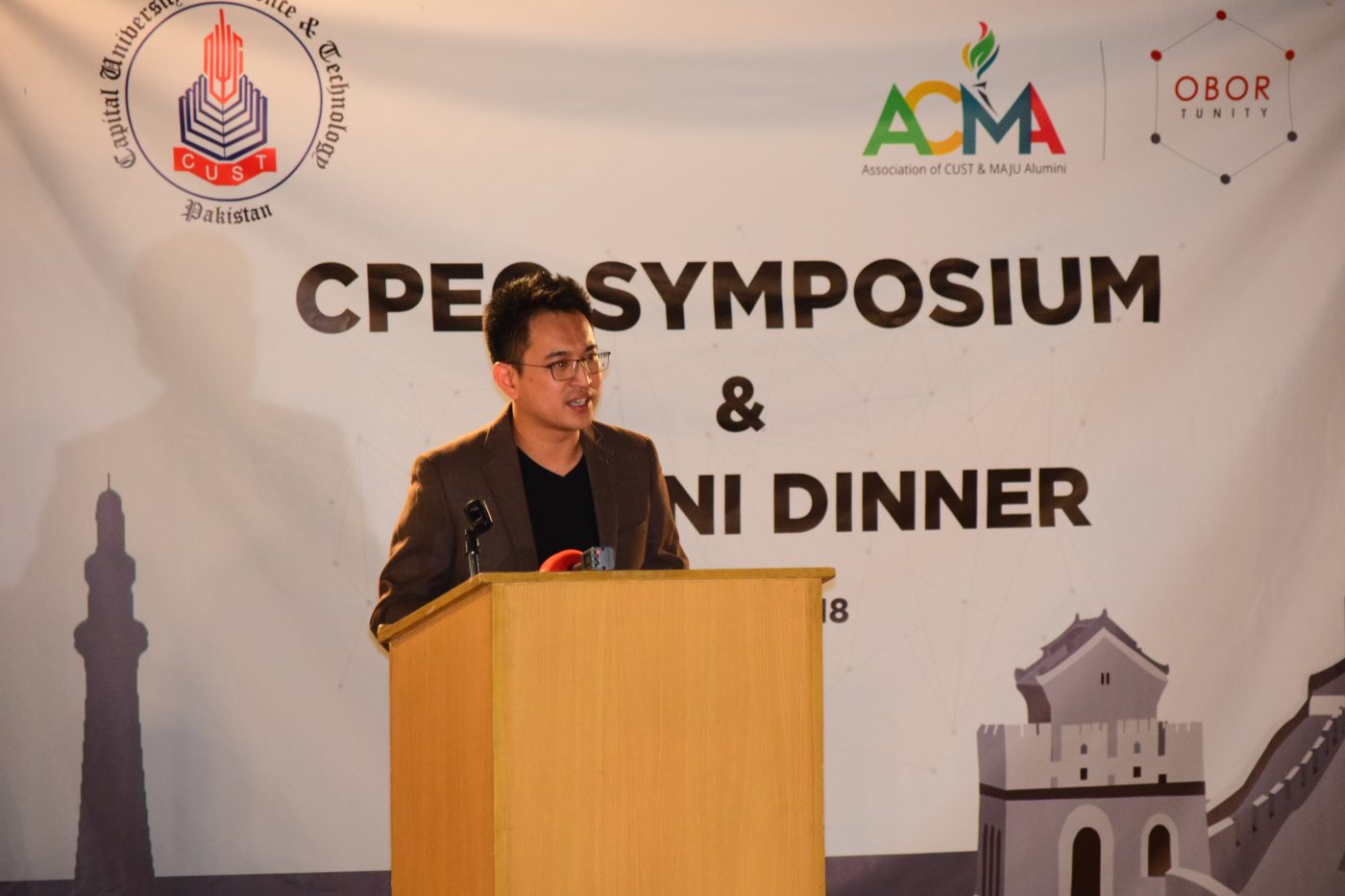 The chief guest for the event was Hamza Saeed Orakzai, founder and CEO, Obortunity Consulting Pvt. Ltd. And Muhammad Idrees the Chinese language consultant. Orakzai enlightened the alumni and audience on the topic importance of CPEC China Pakistan Economic Corridor. He said the strategic ties between Pakistan and China have been on an upward trajectory with a visible thrust on economic interaction after the initiation of China Pakistan Economic Corridor (CPEC) Project. CPEC is a revolution in the field of economics. Under CPEC, China would invest $46 billion in Pakistan for the development of infrastructure and energy. CPEC is a futuristic economic dimension of Pakistan in the 21st century. This multi-dimensional project has opened Pakistan’s rebalancing options from geopolitics to geo-economics.

It includes four pillars i.e. the infrastructure, the energy requirements, workforce development and economic progress. CPEC project is not an economic aid given to Pakistan but it is an investment for the next 15 years. This time frame is important for Pakistan as it is the duration in which Pakistan by utilizing all of its resources and manpower could bring Pakistan into global economic mainstream. It has been said that the CPEC, if utilized properly, would rebound the economy of Pakistan three to four times.

He further added, CPEC would be a game changer for Pakistan and for the region as well. The CPEC would play pivotal role through economic incentives and regional integration in the form of networks, connectivity and partnerships. It is a mega project that has the potential to transform the lives of the people in the region by opening common vistas of co-operation and development in the field of economics. CPEC is the broader part of the Chinese leadership and ambitious vision of reconstruction of ancient Silk Road under the new ‘One Belt, One Road’ (OBOR) initiative.

This would incorporate countries such as Egypt in the Middle East and European countries and important global points in Eurasia. The network expanding in the form of Land Silk route and Maritime Silk route would link the regional countries through trade leading to an economic boom in the region. Gwadar Port has the rare distinction of being one the few points where ‘One Belt, One Road’ would intersect. Therefore, Pakistan should deal optimistically with all the challenges in building of CPEC and convert this golden opportunity into an economic reality.

Pakistani approach must be forward looking towards CPEC. CPEC would also address the grievances of the Province of Balochistan. The sense of deprivation, discrimination and lack of proper management and allocation of resources would be tackled under CPEC. The people would have economic progress and would get opportunities to trade and invest. The oil and mineral resources of the Province would be explored and the establishment of Gwadar Port, Gwadar International Airport and Special Economic Zones (SEZ) would further enhance the significance of the strategic and economic location of Balochistan. CPEC would open job opportunities for the Balochi youth that would acquire modern innovative skills in the future – being part of CPEC.

In addition to his words, He said, the symbolic and strategic role of Karakoram Highway (KKH) is another side of CPEC strategy. The CPEC is not only passing through developed areas of Pakistan but it would cover underdeveloped parts of Pakistan as well. Hence, it has greater economic benefits for Pakistan. CPEC has opened job opportunities for locals in Azad Kashmir and Gilgit-Baltistan as some routes of CPEC would pass through GB. The CPEC project would not just integrate the commercial class or the business class of the society but the role of youth and local masses would be central in all development plans and projects. The CPEC would not only attract the tourism and direct foreign investment in Pakistan but would also help Pakistan to overcome its prevailing energy crisis.

In conclusion, He said, the challenges pertaining to the building of the CPEC must be identified by the government of Pakistan and tackled in time to address the problems in the implementation of the project. The security concerns by the Chinese side has already been addressed by setting up a Special Security Division (SSD) for the security of Chinese personnel working on China-Pakistan Economic Corridor. Similarly, issues such as the CPEC routes controversies and tensions between various political parties and leaders related to CPEC project must be kept aside and completion of CPEC should be given top priority by the government of Pakistan.

In the end the Chinese language consultant sung a song with his students present there and express a humble gratitude towards the hospitality, care and affiliation of Pakistani nation with the Chinese people, moreover, Dr. Ansir Rajput gave the thankyou note to all the guests and participants.